I have a confession to make - all this rain is my fault!
​
During an idle moment the other day, I thought about doing something on the barbecue for the blog, and ever since then there’s been a monsoon here at the Grumpy Kitchen. Sorry.

So barbecue was off - for the moment.
But while I was out consoling myself with a strong Americano, I came across these huge British asparagus spears from my local deli - Why Not? in North Berwick - and just couldn't resist buying a couple of bunches.

Partly because we are nearing the end of the British asparagus season, and partly because I could cook them my favourite way while still satisfying my craving for that barbecue taste.

I love asparagus, despite the medical implications (seemingly ‘asparagus pee’ is something to do with your genes) and chargrilling it simply is by far the nicest way to cook it, in my humble opinion.

Best with larger spears, all you do is snap off the woody ends (just bend them and with a little pressure they will snap off at the correct point), and trim the bottom halves with a peeler to keep them nice and even for cooking.

I then pop them in a plastic bag with a tablespoon or so of olive oil and some seasoning, close the bag and give them a good rummage around to coat the spears with the oil.

Heat a griddle pan to very hot (no need to oil) and place the asparagus spears carefully on the ridges.

Cook for about 5-10 minutes, depending on the thickness of the spears, until tender but still with a little bite. You should have lovely caramelised lines on the asparagus from the pan ridges - just like a barbecue.

If you don't have a griddle pan, stick the asparagus (oiled and seasoned in the same way) on an oven tray and roast in a hot oven (200°c - 220°c) for about 10-15 mins or until tender and slightly charred.
​
I love asparagus simply chargrilled with salmon or on it’s own with a poached egg on top.

It’s just a shame the British Asparagus season just lasts a couple of months, unlike the rain.​ 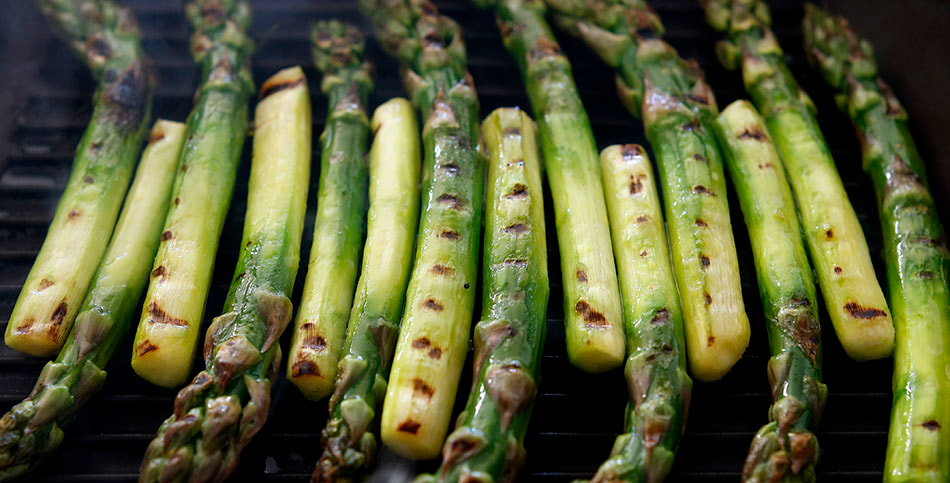