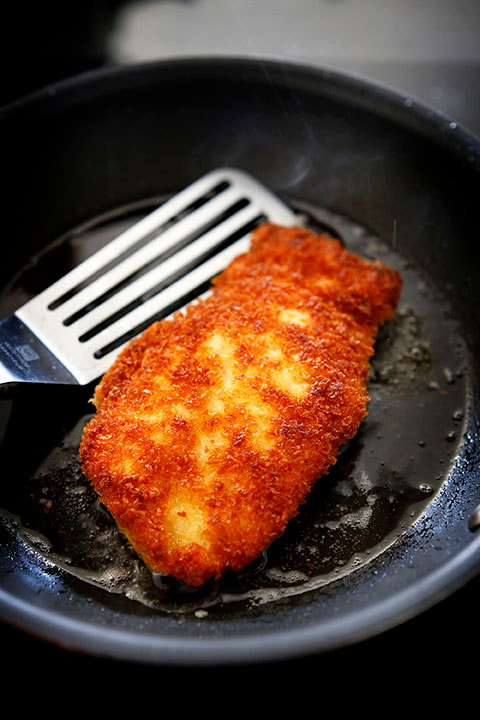 I would make schnitzel all the time, purely because it has such a fantastic name.

I wanted to call my dog Schnitzel, but that was vetoed by Mrs Grumpy. He is now called Murphy. And it doesn't
matter how many times you shout Murphy while your dog
is vanishing over the horizon after some furry creature that makes Usain Bolt seem slow, it doesn't give you the satisfaction of screaming Schnitzel at the top of your voice.

But the other (and real) reason I would make schnitzel more often, is quite simply, it is delicious to eat. Whether you use veal, pork, beef or, as I have done here, chicken, the combination of tenderised meat and crispy breadcrumbs is hard to resist.

Anyone who has been to Austria or Germany will have no doubt seen and tasted the classic and authentic Wienerschnitzel, made with veal.

But the schnitzel can be found all over the world, including Japan where it is called tonkatsu, using flattened pork loin coated in Panko breadcrumbs, and even the USA, where they bafflingly call  flattened tenderised round steak, coated in breadcrumbs, a Chicken Fried Steak. Oh, yes, then smother it in something called ‘gravy’ and serve it with ’biscuits’ which are like our scones.
Confused? You're not the only one.

Here though, I am talking about a simple chicken breast fillet, flattened with a rolling pin, coated in flour, egg and breadcrumbs and then shallow fried to a crisp, golden finish. Serve with a potato salad in the Germanic style and what could be better than that for a midweek lunch or dinner.

Use normal breadcrumbs if you wish, but I would urge you to use Panko breadcrumbs.
They are widely available these days and they give such a light, crisp finish they will give your schnitzels that finishing touch.
I have even cooked these in a moderately hot oven instead of frying and they have still come out crisp and golden.

If you are in the mood for a bit of embellishment on this simplest of dishes, then a handful of freshly grated parmesan added in to your breadcrumbs before coating, gives an extra savoury kick.

It may not be authentic, but in my opinion it’s better than biscuits and gravy!

Place a chicken breast on a chopping board and remove the tender - that’s the thing that looks like a mini chicken breast attached underneath the main breast. Because it is smaller it can split when being pounded with a rolling pin, which is what you are about to do with the larger breast.
The tender can be used grilled or fried at a later time for a great chicken sandwich, or in a stir fry.

Put the chicken breast between two pieces of clingfilm or in a strong plastic food bag, and
with a rolling pin, bash it flat just over half a centimetre thick all over.
But don't get carried away and make it too thin or it will start to shred. Think nice thoughts while you are flattening it! Repeat with the other chicken breasts.

Put 4 tablespoons of plain flour and a good pinch of cayenne onto a plate and mix. On another plate put the beaten eggs. And on a final plate, put the panko breadcrumbs mixed with the parmesan (if using).

Season each piece of flattened chicken and dredge in the flour. Shake off the excess, then dip into the beaten egg and finally coat with the breadcrumbs, pressing down lightly to make sure all the chicken is coated. 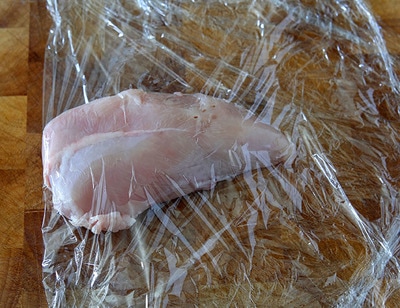 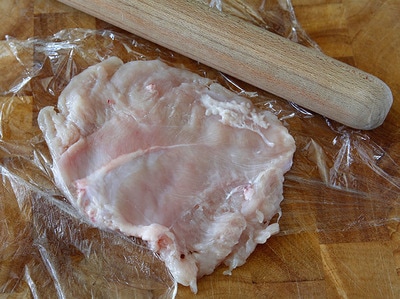 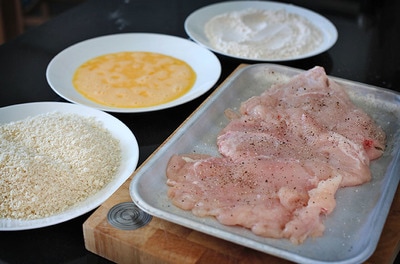 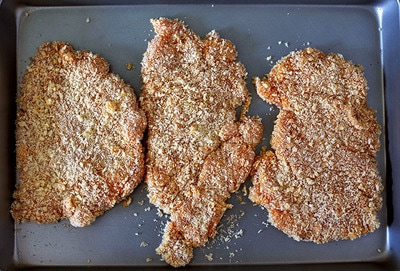 Transfer to a baking tray or large plate and keep chilled in the fridge until you need them.

Shallow fry the schnitzels in some olive oil over a medium to high heat, for about 4-5 minutes each side until golden brown and crispy. You can keep them warm in a low oven if you have a few to do - they won't lose their crispness.

If you decide to bake in the oven, spray the schnitzels with olive oil on each side and place on a baking tray. Put in a 210°C/190°C fan oven for about 20 minutes until golden brown and crispy. They won't quite be as uniformly coloured as the shallow fried version, but will taste just as good.

Be a devil and stick a fried egg on top and it could be the food that makes you watch The Sound of Music where even Julie Andrews extols the virtues of the schnitzel (“Doorbells and sleigh bells, And schnitzel with noodles”).

Then again, no food is worth that sacrifice!
​ 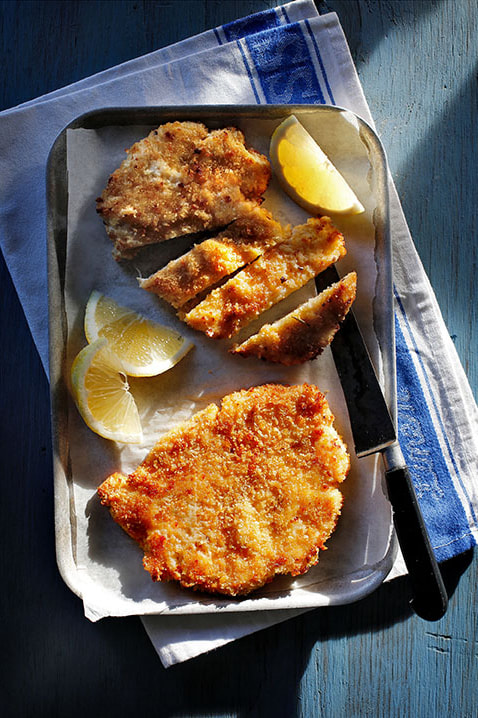