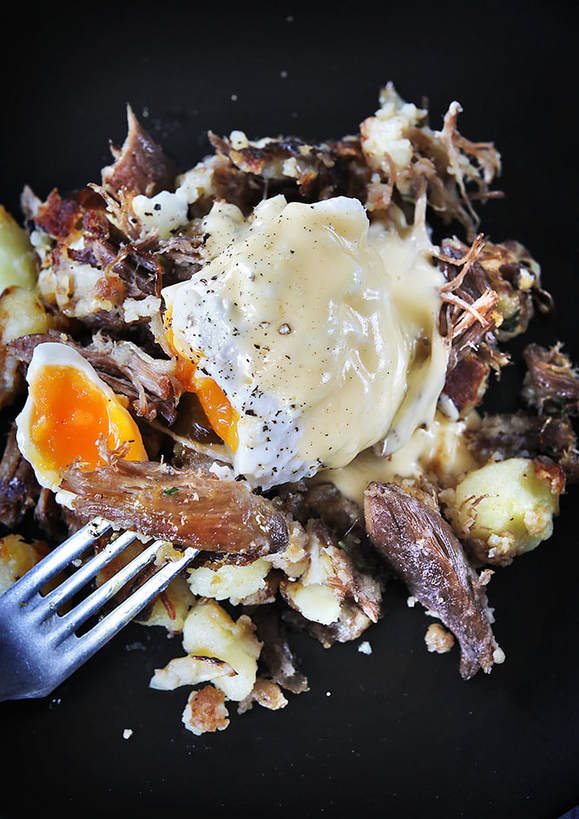 This is a recipe I came across the other day while taking my elderly mother out for a bite of lunch.

Normally, you would imagine someone in their nineties would choose something simple like a bowl of soup, or a sandwich, or something they could suck if they had forgotten to put their teeth in!

Not my mother though. Her lunch choice was Duck Confit Hash with Poached Egg and Hollandaise Sauce, and much to my chagrin, was one of the more expensive dishes on the menu.

I’ve learnt my lesson though, next time it’s the Age Concern cafe for a scone and a cup of tea.

Giving her the benefit of the doubt, I’m sure it was a nostalgic choice with her remembering the corned beef hash she used to make for my brother and me as nippers.
​
​I did manage to try a morsel of the Duck Confit Hash while she was wasn't looking, and it was really good, richer than the hash I used to remember, which is not difficult bearing in mind the duck confit and hollandaise.

My thoughts of what flavourings were in the dish were interrupted by the searing pain in my hand, where my beloved mother had stabbed me with her fork for stealing her lunch.

I didn’t get the chance to try any more as she wolfed it down with remarkable zeal for a ninety year old.

Anyhow, I thought it was something I could do at home for a nice lunch or supper when you want something comforting but a bit special - and easy.

You don’t have to confit your own duck legs, as most supermarkets sell them these days, and all you need to do is pop them in the oven to heat through and crisp up.

And to stay on the healthy side of decadence, drain and dry off the legs when they come out the oven but keep a few tablespoons of that delicious duck fat to use for frying the potatoes. You don’t have to of course, you can use olive oil, but boy does it make a difference.

It may not be the prettiest of dishes - but who cares?

And don’t be put off by making a hollandaise sauce, which can seem tricky and a bit daunting, I have given a recipe for a quick foolproof hollandaise that only takes a minute or two, and to me is indistinguishable from the full blown tricky version.

Cook the confit duck legs in the oven as per the directions, but because they are already cooked, it should only take about 20 minutes in a moderately hot oven until the skin crisps up. You don”t need to use the crispy skin in the hash (I didn’t) but it can end up as a cooks perk (it did).

When cool enough to handle, the duck meat will pull easily away from the legs. Reserve until needed.
​
Save a couple of tablespoons of the duck fat to fry the potatoes in.

​For the hash, peel the potatoes and cut into good size cubes, slightly bigger than an oxo cube. (pic 1)

Boil in salted water until just tender and a little fluffy on the outside, but still holding their shape. This is important, as quite a few of the cubes will mash away when you fry them, but you still need some left for texture. You don’t want your hash to turn into mash! (pic 2)

It’s the fluffy outsides and the ones that mash away that produce the all important crispy bits we all know and love in a good hash.
​Drain the potatoes when ready and leave to dry off.

Meanwhile, in a tablespoon of olive oil, sauce the onions until slightly caramelised, then add the potato cubes with the little bit of reserved duck fat.

Give everything a good stir together trying to keep some chunks of potato for texture.

Let the potato onion mix lie in the pan for a few minutes to allow it to crisp up, then turn over to let the other side do the same, until you have a good ratio of crisp and soft cubes of potato.

Add the confit duck meat, combine and season to taste.

While this is cooking, poach some eggs.

I’m not going to tell you how to poach an egg, but I will share with you the technique I use, that seems to give me the most consistent results. You will find this across on my Foodie Chat page.
For the hollandaise

Break an egg yolk and a teaspoon each of water and lemon juice into a deep jug or container that is just wide enough to take the head of the stick blender.

Melt the butter in a small pan until foaming. Take off the heat and if your pan has a pouring spout, pour straight into the jug containing the egg yolk, water and lemon juice, while the blender is going.  (see  pic 3)

If your pan cannot pour very well, just transfer the hot butter to a measuring jug.

Slowly pour all the melted butter into the jug while blending all the time.

The mixture will very quickly become thick and creamy and voila, a lovely hollandaise without the hassle of double boilers, curdling or stress.

It will keep warm for a few minutes or so while you pile the hash on a plate and perch a poached egg on top.

Pour some hollandaise over the poached egg, season with a little sat and a sprinkle of cayenne if you fancy.