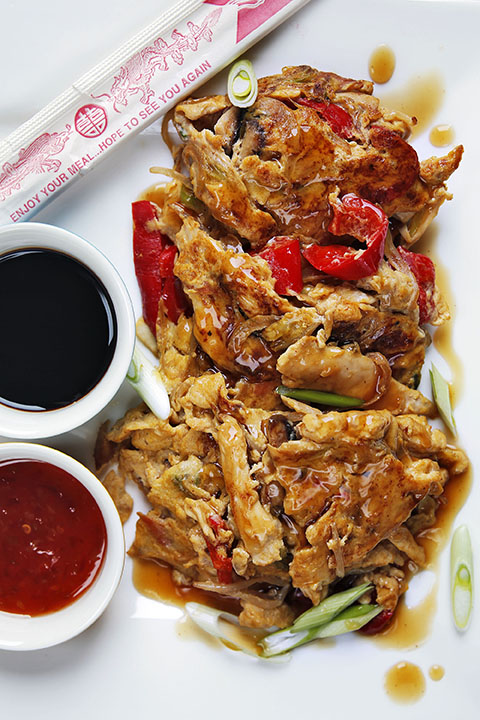 There are some times when only a Chinese takeaway will do. Nothing else.

For me those times usually involved last orders at the local and the start of Match of the Day, flares and a mullet. Or at least they used to.

Now I am a responsible member of society and my excesses kept in check by Mrs G, I look for my takeaway fix nearer home.

With Chinese New Year looming at the end of this month I decided to make one of my favourite takeaway meals at here in the Grumpy kitchen.

Egg Foo Yung was a weekly standard from The Lotus Flower near to my parents’ house. Admittedly it was normally served slathered in curry sauce with a portion of chips - it was the 70’s after all - but I can still remember the soft waves of pillowy egg and char sui chicken, vying for prominence with crunchy beansprouts and vegetables.

So what better way to celebrate the Chinese Year of the Rooster than with a plate of Chicken Egg Foo Young.

I believe Egg Foo Yung was an American/Chinese invention from the Gold Rush era in the late 1800's but the original Foo Yung originates from a Shanghai recipe of foo yung egg slices.

It has been westernised over the years and is basically a Chinese omelette, probably nearer a frittata in style.

But it is the way you cook it that makes it special for me.

Instead of a straight flat set omelette, the eggs are almost half scrambled and folded during cooking to give a 'layered' effect with added vegetables and meat or seafood.

This is how I remember the Lotus Flower foo yung, and I was always amazed by this scrambled omelette and how they did it.

Now I know, and also know how easy and quick it is to do.

Essential of course are the eggs, but you can be creative with the additional ingredients.

Vegetarians can use beansprouts, water chestnuts, cabbage, carrots, mushrooms, peas and onions to the eggs.

We carnivores can add cooked shredded chicken, char sui pork, king prawns or ham. Feel free to experiment with the amounts - it's up to you. But try and keep the ratio of eggs to ingredients similar to the recipe.

I've always found it is best cooked in a wok as the deep bowl style keeps the omelette together without too much spreading, and the quick stir frying technique is pretty essential to the folding of the egg mixture. That’s not to say you can't make this in a normal frying pan, you can, but you need to work a bit harder to keep the egg mix together without it becoming too flat.

If you have your vegetables cut and prepared before cooking, the dish only takes 5 or so minutes to cook.

Although I mentioned earlier I always had my takeaway egg foo yung with curry sauce (probably the beer talking), the traditional accompaniment is a gravy or sauce made with chicken stock, oyster sauce, soy sauce, rice wine vinegar and thickened with cornstarch or arrowroot.

Often described as 'brown gravy' on takeaway menus, it doesn't sound very appetising, but it is surprisingly good and goes well with the foo yung. And it takes just minutes to prepare.

Give it a try but if you don't fancy it, sweet chilli sauce and soy sauce make a nice accompaniment.

I serve a side dish of wholegrain rice (I know, but it is really tasty and good for you) but plain white rice is fine.

So I'll be making this for Chinese New Year and transporting myself back to the 70's, minus the flares and mullet!

Over a high heat, put a tablespoon of vegetable oil into the wok. Stir fry the onions and peppers for only a minute, then add the mushrooms for another minute and finally the mixed vegetables along with half the spring onions. This stir frying shouldn't take more than 3-4 minutes. Remove from the wok and set aside to cool.

Meanwhile, make the gravy.
Bring the chicken stock, rice wine vinegar, soy and oyster sauces to the boil in a small saucepan.
Add the dissolved cornstarch or arrowroot and whisk for about 3 minutes until thickened and glossy. That’s it, gravy ready.

Put the eggs, oyster sauce, soy sauce and shaoxing rice wine in a large bow and beat until mixed.
Now add the vegetable mixture, shredded chicken and stir until combined.

In the now cleaned wok, heat a tablespoon of oil (I use half sesame oil and half vegetable oil for added taste) over a high heat and pour in the egg mixture.

As the edges start to set and bubble up (pic 1), take a wide flat spatula or something similar and start to fold large areas of the eggs over (pic 2).
Leave for a few seconds and repeat until all the egg mixture is cooked but still moist (pic 3).
You want large soft chunks of foo yung, not one whole omelette or scrambled eggs.​

Divide onto 2 or 3 plates (depending how hungry you are) with a dribbling of brown gravy or some soy and sweet chilli sauces. Garnish with the remaining spring onions, serve with some rice and rejoice in the Year of the Rooster.