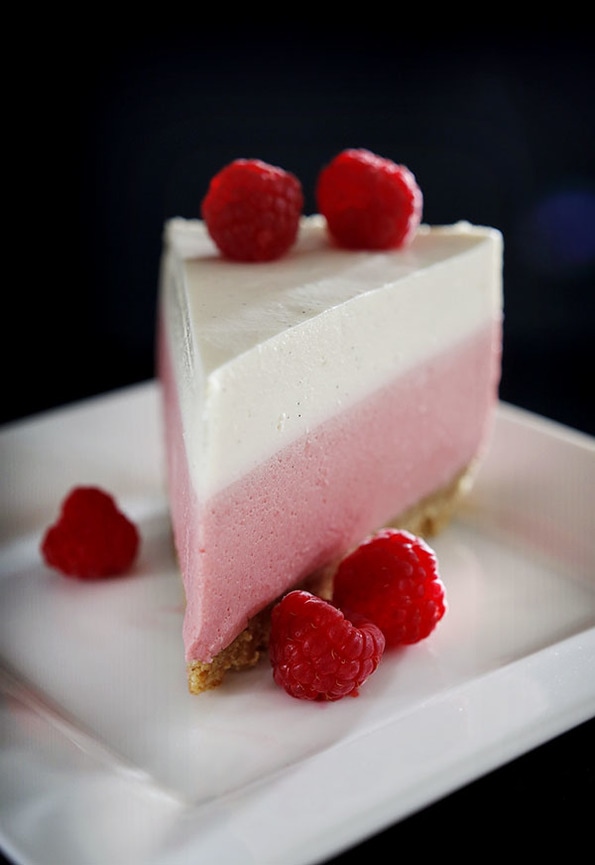 It isn't often that Mrs Grumpy Cook Club and myself eat out at restaurants these days. It’s my fault, I enjoy cooking so much that paying for food that I feel I can do just as well myself just doesn't seem right.

But that is my cross to bear and my misplaced opinion of my merits as a cook shouldn't prevent me from treating Mrs GCC to a slap up meal at a good restaurant every now and then - or vice versa.

When we do venture out, the first thing I always look for on the menu is the cheeseboard.

I will always choose a cheeseboard (if it is good) over a dessert - Mrs GCC is the opposite - but when not available my dessert default setting would be some kind of cheesecake.

Not because it has cheese in the title, but because I like the combination of creamy topping and crispy biscuit base, often offset with a sharp fruit coulis. I’m talking about a no bake chilled cheesecake, not the New York style baked one, which has eggs in the filling and needs the help of an oven, although I would gladly scoff that type too.

Quite often though, I find a slice of cheesecake just a bit too rich at the end of a meal, so I started searching for a dessert similar in style but lighter to eat. And something I could make myself of course (there’s that misplaced opinion again!).

After much research, and an extra belt notch later, I found a recipe that has all the criteria I was looking for.


It looks and tastes like the best no-bake cheesecake I have ever had, yet has a much lighter texture that doesn't make me feel too full at the end of a meal - unless I have an extra slice!

It consists of two layers of mousse, one yoghurt and one raspberry, on top of a base of crushed digestive biscuits. And for me at least, it isn't as sweet or cloying as some cheesecakes I have tried.

If you are making your own raspberry puree, a bag of frozen fruit is ideal - and cheaper.

Just a quick word on gelatine, which is used in this recipe to set the mousse.
Some friends find using gelatine a bit daunting, but if you use the sheets, available from most supermarkets, it really is very easy. (I used the Dr Oetker Platinum Grade Leaf Gelatine here). Soften in water, squeeze and dissolve, it’s as simple as that.
And you can also get vegetarian gelatine, usually in powdered form if you prefer. The usual conversion is 1 tablespoon of powdered to 3 sheets but check on the box to be accurate.

I hope you enjoy it as much as I do. It went down very well with my tasting panel (neighbours!).

You will need a 20cm spring form cake tin, base and sides lined with baking parchment.

Ingredients
For the raspberry mousse layer
For the yoghurt mousse layer
Method
Mix the crushed digestives and melted butter together, then pack into the base of the prepared cake tin. Pop into the fridge for about 30 minutes to1 hour to firm up. 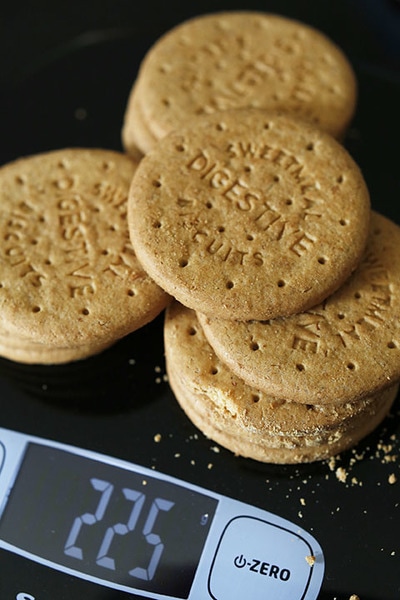 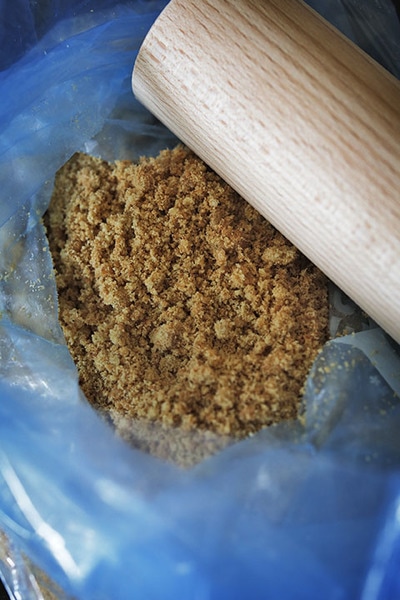 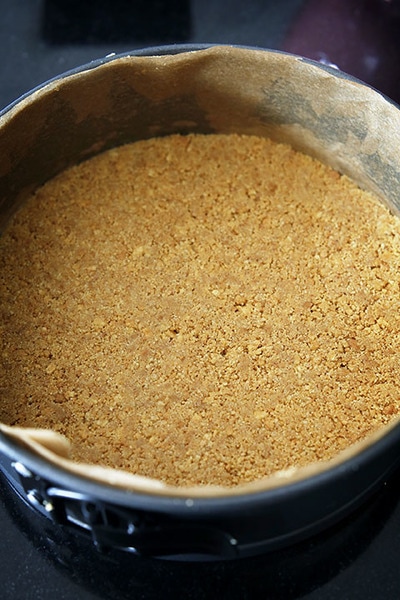 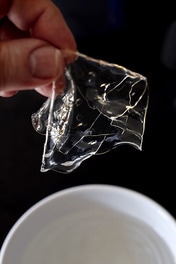 Meanwhile, soften the sheets of gelatine in some cold water for 5 minutes or so until soft.

Warm 100g of the raspberry puree in a saucepan with the sugar (I use 1 tbsp of sugar, but if you have a sweet tooth, feel free to add another), and stir until the sugar has dissolved.

Lift the gelatine out of the water and squeeze well, getting rid of as much liquid as you can. Drop into the warm puree and stir until dissolved. Add the remaining puree and give a good whisk to combine. Leave to cool to room temperature.

Just keep a check on the puree as it cools to make sure it doesn’t set, giving it a quick whisk if you think it is. It should be okay, but best to keep an eye on it. 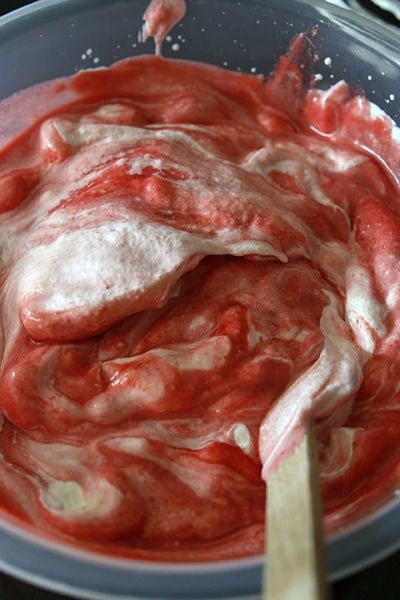 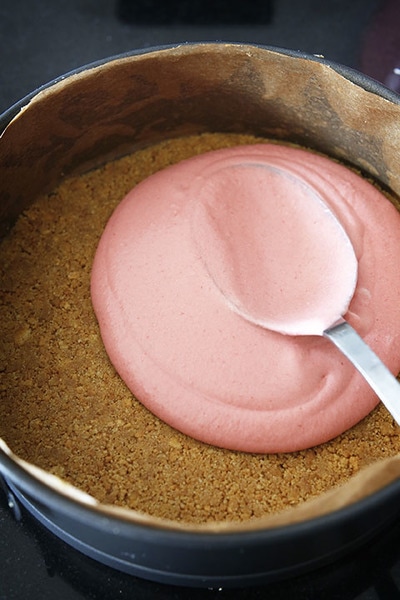 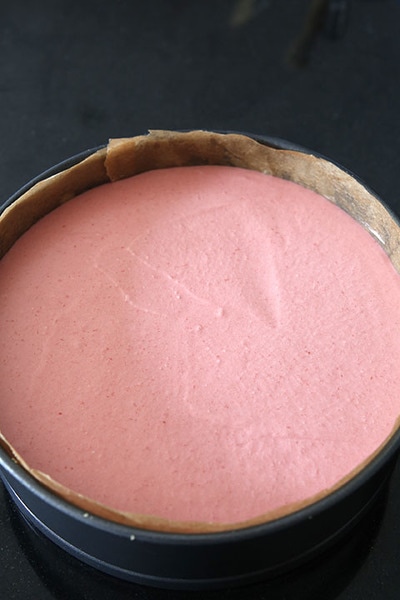 When cool, fold in the whipped cream which you have whisked to a soft peak stage. As soon as it is amalgamated (no streaks of cream), pour on top of the biscuit base, smooth over with a palette knife and refrigerate to set (at least an hour, possibly more). I usually make to this stage in the morning, then continue later in the day.

For the top layer of yoghurt mousse, again soften the gelatine sheets in some cold water for 5 minutes.

Warm through 60ml of the whipping cream in a saucepan, and add the gelatine leaves after squeezing out the excess water. Stir until dissolved, and leave to cool a little.

Fold through the Greek yoghurt.

Whisk the remaining cream, sugar and vanilla together until soft peaks form and add to the yoghurt mixture. Fold through until amalgamated then spoon onto the now set raspberry layer and smooth out with a palette knife or spatula.
Refridgerate until set and firm which should take about a couple of hours.