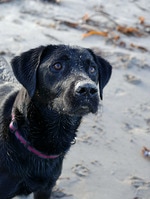 The Gannet Guzzler
​There are times when only a strong cup of coffee will do. This morning was one of those times.
​
It was after removing what was left of a decaying Gannet from the mouth of my dog (bless him) during an early morning walk on the beach that I decided I needed a caffeine fix. Later in the day and I’m sure it would have been something stronger.

So after placating my best friend (some chance!) after depriving him of his morning snack, I headed for the nearest cafe to disinfect my hands from the stench of putrefying Gannet. 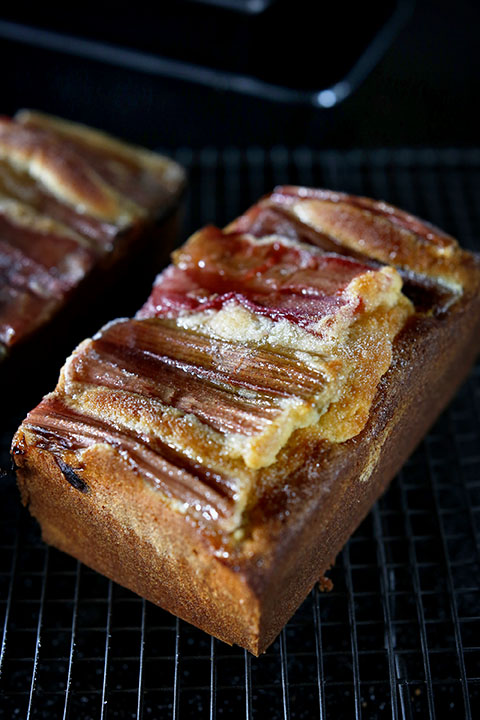 A couple of double espressos later and I was ready to face the world - and my dog - again, despite the lingering whiff of stinky seabird in my nostrils.

On my way out of the cafe I noticed some lovely local rhubarb being sold.

Being grown outside at this time of year, maincrop rhubarb is more robust with a stronger colour and flavour than its cousin the forced rhubarb, which is grown in dark sheds in the ‘rhubarb triangle’ around Yorkshire during January and February.

The delicate pink forced rhubarb has its fans but I definitely prefer the natural field-grown variety for its sharpness and deeper flavour.

So I purchased half a dozen stalks of the fruit that is actually a vegetable (botanically speaking) and headed home with the Gannet guzzler in tow.

All I needed now was a recipe to show off my tart treasure trove, apart from the ubiquitous crumble or custard-based pudding.

I found an interesting-sounding Rhubarb and Buttermilk Cake on The British Larder website and thought that it would be ideal for my new acquisition. I have tweaked it slightly by using less sugar when poaching the rhubarb, and using the reduced rhubarb poaching liquid as a glaze.

The result is a moist and tasty cake thanks to the buttermilk, with a close texture, and the sweet sharpness of the rhubarb was a lovely contrast.

I made two small cakes in 1lb loaf tins, but I can’t see any reason why it wouldn't work as a bigger cake in a 2lb tin. Just cook a little longer and test with a skewer. When it comes out clean, it’s done.

For the poached rhubarb
For the buttermilk cakes
METHOD 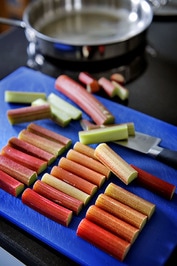 Wash and cut the rhubarb into roughly 8cm pieces, put in a wide pan and sprinkle with the sugar.
Add the cointreau, if using, and the water.

Bring to a gentle simmer, cover, and cook for about 5 minutes. I find I need to keep looking at the rhubarb pieces from this point, to test if they are tender. Some pieces will soften before others, so take them out and put on a plate or tray. You want the rhubarb to be tender, so a small knife can easily go into them, but not soft and mushy, which can happen quite quickly. So be vigilant and keep removing the rhubarb pieces when they reach the tender stage.
​
When they have cooled, drain their juices back into the pan, and cover them and chill in the fridge until needed. 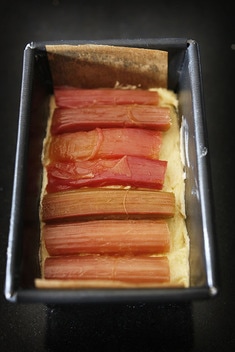 Pass the rhubarb juices through a sieve into a smaller saucepan and reduce to a syrup. This can be cooled and used as a glaze for the cakes.

In a food mixer, using the paddle attachment, cream the butter and sugar together until pale and fluffy. Add the eggs, one at a time and mix until well incorporated.

Sift the flour and salt into the bowl and add the buttermilk. Fold everything together until well mixed.

Divide into the two 1lb loaf tins, or pour everything into the 2lb tin, and level the surface with a spoon or spatula.

Take your poached rhubarb pieces out of the fridge and gently pat them dry with some kitchen towel. Then place them across the surface of the cake, making sure there are no gaps. You don't need to press them in, just lay them on top. 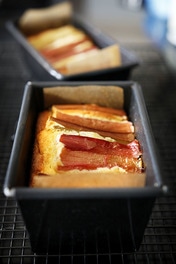 Put in the oven and bake for 40-45 minutes, checking near the end of the time with a skewer for doneness. Just give a few minutes longer if the skewer is moist and sticky. It should come out clean and dry.

Cool in the tins for about 10 minutes, then take them out onto a cooling rack. Spoon over some of the poached rhubarb syrup from earlier and leave to cool.

Sprinkle with a bit of sugar if you wish and cut into slices.​

It is a great cake with a cup of tea or coffee, but can be made more substantial if served warm as a chunky slice with custard.