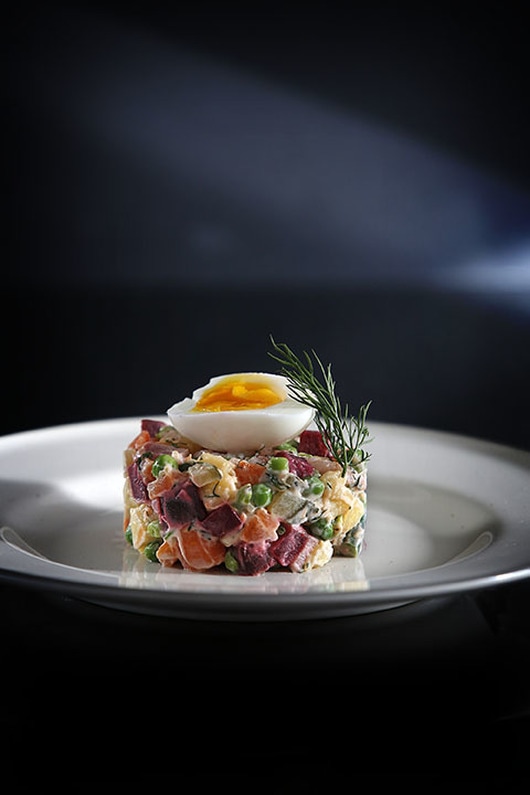 For those of us who can remember the little tins of Heinz Vegetable Salad that were around in the 50’s, 60’s and 70’s (I can just remember them in the 70’s, honest), I would like to assure you that this recipe is nothing like that.

For a start, this one tastes good and bears little resemblance to the tins of potatoes, peas & carrots  in some kind of gloop, that could be passed off as Russian Salad at dinner parties back in the day.

Mind you, my version of a Russian Salad also bears little similarity to the original, which was invented in the late 19th century by Belgian chef Lucian Olivier while he was working at the famous Hermitage restaurant in Moscow. In fact it was, and still is, sometimes known as Salad Olivier.

His salad included caviar, grouse, smoked duck and veal tongue. Well, it was the time of the Tsars and pre-revolution Russia. His exact recipe though, was a secret he took to his grave and versions of it have continued over time and it is still a must-have dish at any Russian New Year feast.

Different countries have different versions but the base of the recipe is still potatoes, carrots, peas, capers and gherkins bound in mayonnaise.

I first became a fan when I had it as part of a tapas meal when I was working down in London many years ago. It was the best thing on the tapas menu and the waiting staff surely thought I was bonkers when I would just order 3 or 4 Russian Salads as my tapas selection.
​
You can add whatever you fancy over and above the base ingredients, and I always include  cooked, diced beetroot, not because it is thought of as a Russian staple vegetable, but because it tastes great and gives a fantastic splash of colour to the dish. Make sure you use either fresh beetroot or as I do, the vacuum packed cooked beetroot you can get in most supermarkets (but not the kind in vinegar).

I also add some chopped ham and prawns, however, it is delicious as a vegetarian salad too. One of the key ingredients in my opinion is fresh dill, and lots of it.

If you are making it as a main course, pop half a soft boiled egg on top and serve with melba toast or crispbreads. As a starter, just serve a smaller portion and omit the egg, or use half a soft boiled quails egg if you want to impress.

приятного аппетита - that’s Russian for enjoy your meal, I think! 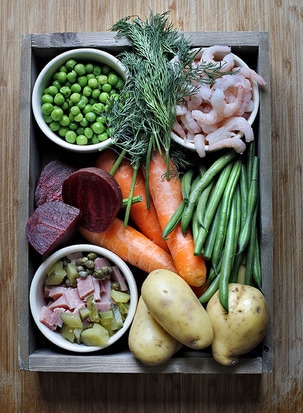 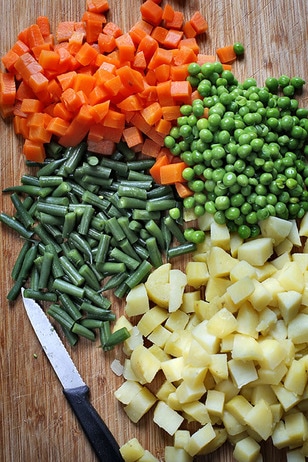 METHOD
Cook the potatoes and carrots until tender, cool, then cut into small dice, all the same size.
Cook the french beans until tender but still with a little bite to them, cool, and cut into centimetre pieces.
Boil the peas - I use frozen - then cool and reserve.

I tend to use frozen peas because I always have them in the freezer, and they are very good, but as we are just about to head into prime garden pea season, try using some freshly picked. Boil them for a few minutes longer and they will taste lovely and sweet with just that little extra firmness the frozen ones lack.

Chop the beetroot into the same size dice as the vegetables, then dry with kitchen roll. This drying is important as it helps to prevent the beetroot from ‘bleeding’ into the mayonnaise and turning everything pink. And add the beetroot to the rest of the ingredients shortly before serving just to be on the safe side.​

Cut the dill pickles or gherkins into small dice and mix with the mayo, along with the finely chopped dill and capers. You need enough mayo to just bind the vegetables together, you don't want to make it gloopy. 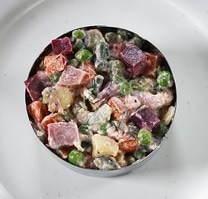 Mix everything together in a large bowl (except for the beetroot) until combined and taste for seasoning. I have always found that I need more salt and pepper than I think, but taste for yourself.
Add the prawns and small strips of ham and fold through and about an hour or so before serving, add the beetroot and mix well.
​
You can pile a mound of the salad on a plate if you wish, but if you want it to look a bit smarter, pile it into a metal cooking ring centred on your plate, and press down gently to compact everything together. 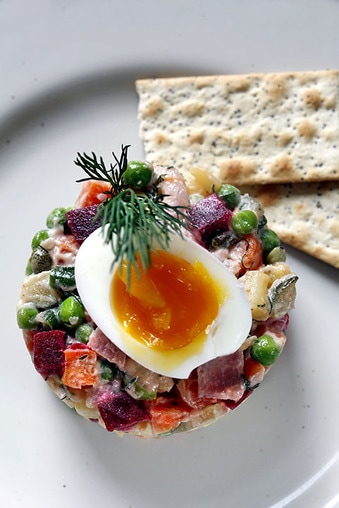 If you’re cooking for a few people you can do this bit in advance, by putting the rings on a baking sheet and piling in your salad up to the top and placing in the fridge for an hour or two. Just remember to bring back to room temperature.

​When ready to serve, slide a fish slice or similar under the base of each ring and lift to the centre of your plates. Carefully lift off the ring and a neat cylinder of Russian salad will look really professional.

Garnish with half a soft boiled egg, a sprig of dill and some crisp bread or melba toast.

Even Vladimir Putin would be impressed.