So what’s the difference between a pie and a pithivier, apart from one is harder to pronounce than the other?
Not much, truth be told.

A pithivier is a French pie made with two layers of flaky puff pastry, a speciality from the town of Pithiviers (hence the name). It can be sweet or savoury, glazed with egg wash, then decorated with curved cuts in the pastry before baking.

Traditionally, they were filled with an almond frangipane, but these days anything goes.

A pithivier has a domed look about it, as the filling is heaped on the bottom pastry layer without spreading, before draping over the top layer and sealing round the edges.

I think it looks fantastic on the plate, either as a dessert or savoury course. And it is easy as a pie to make.
This recipe is for a pithivier with a savoury filling based on the famous Russian dish kulebiaka, a mixture of salmon, rice, mushrooms, shallots, hard-boiled eggs and dill encased in a brioche or pastry dough.

I’ve poached the salmon in the oven with some white wine for extra flavour, but you can poach the salmon on the hob in a court bouillon (see Foodie Chat for recipe and photo).

This version gives a lighter result using thin rolled puff pastry, but still with the tastes and textures of the traditional kulebiaka. 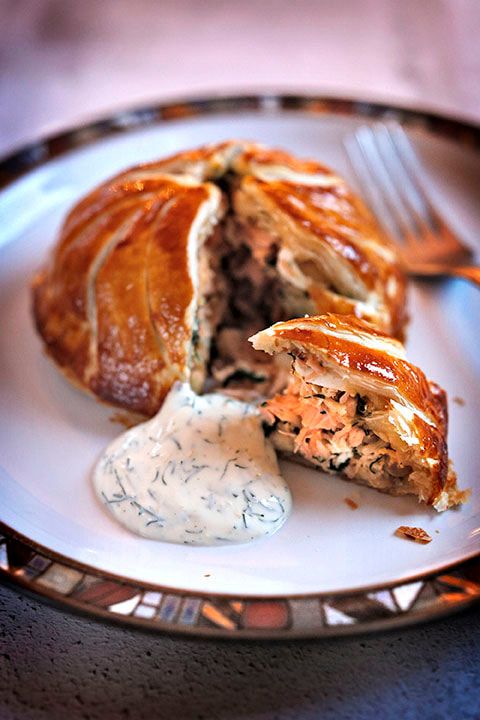 Place the salmon in a roasting tin and pour over the white wine. Season well.

Dot with butter, cover with foil and bake in a pre-heated oven at 180℃/160℃ for about 20 minutes until the salmon is firm to the touch and just done.

Place a good knob of butter in a frying pan, add the shallots and saute for about 5 minutes until soft but not coloured.
Add the sliced mushrooms and gently fry until most of the liquid released has evaporated as the mixture needs to be reasonably dry.
Add the herbs, pinch of salt and lemon zest, stir through and leave to cool on a tray, along with the microwaved rice.

When everything is nice and cool, flake the salmon (dried off from its liquid) into a bowl and add the other ingredients.
Gently mix together, taste and season if needed, then cover and refrigerate until you are ready to assemble the pithivier.

Cut out 2 x 15cm circles and 2 x 11cm circles from the pastry. I had to re-roll the scraps of pastry for my final smaller circle, but if you have a 375g or bigger pack of pastry you shouldn’t need to do this. I’ll buy a larger pack the next time!

Place the pastry circles on a floured tray and chill in the fridge for 30 minutes.

Remove from the fridge, along with the salmon/rice mixture.

Place the two smaller circles on a baking paper-covered oven tray, and make a mound in the centre with the mixture.

Brush the border with some egg yolk and drape the larger pastry circle over the mixture, and press down the edge all the way round to seal. Brush all over with the remaining egg yolk and put back in the fridge for about 30 minutes.

Take out of the fridge, and with a sharp knife, score curved lines all the way round from top to bottom and make a little hole on the top to allow steam to escape. Scoring after glazing with the egg yolk, makes the cuts more prominent to look at as they will be paler in colour compared with the deep golden brown of the rest of the pithivier.
Bake for 20-25 minutes until a deep golden, almost mahogany colour.

Cool slightly, and cut each pithivier in half before serving with boiled new potatoes, and vegetables of your choice.

If you are hungry have one to yourself and serve with a salad and a dill sauce.

For the sauce, mix a few tablespoons of half fat creme fraiche with a bunch of chopped dill, half a teaspoon of dijon mustard, zest of a lemon and salt and pepper.

It sounds as though there is a lot to do, but there isn’t really. It’s more my long-winded way of telling you how to do it.​

But this pithivier, pie, or whatever you want to call it will definitely impress at a lunch or dinner with its visual impact. They say you eat with your eyes so you're half way there already. 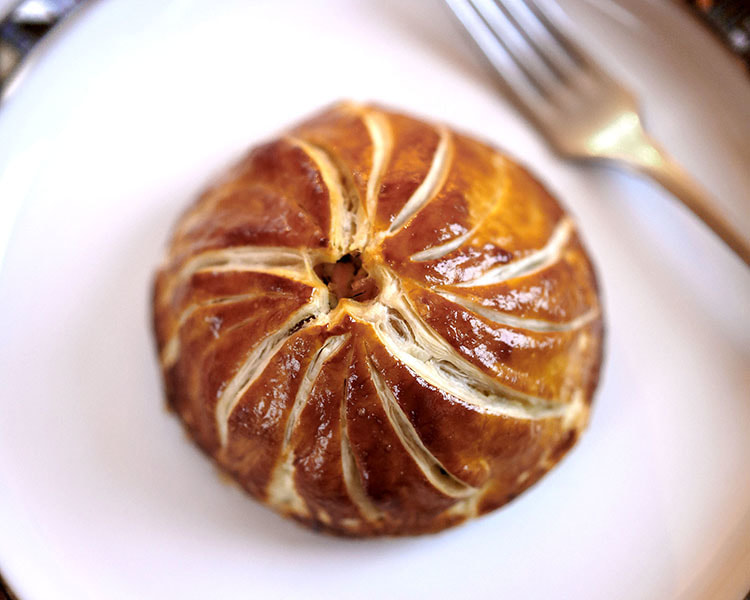