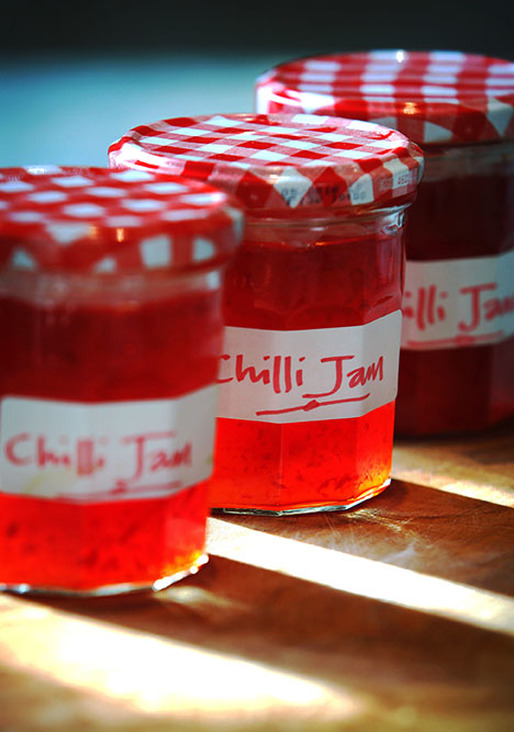 When it becomes chilly outside it's time to get chilli in the Grumpy kitchen.

This is a recipe (thanks to Nigella) that uses only 4 ingredients and if you can boil a pan is the easiest thing you will ever make. I have tried this with added garlic or ginger but this is by far the best.

You only need some red chillies, red peppers, cider vinegar and sugar and off you go.
The only thing you need to think about is when to take your jam off the heat. Too soon and it may not set enough and too long and it may set too much.

If you are a frequent jam or marmalade maker then this will be second nature to you and if not a sugar thermometer (Amazon £5.39) makes it easy. Just boil until the temperature reaches 105°C (220°F).

Another good way to tell, if you are neither experienced nor have a sugar thermometer, is to stick a small saucer or plate in the fridge for about 30 minutes to chill. When you think the jam has reached setting point (10 minutes for this recipe), take the saucer out of the fridge and drop a teaspoon of jam on it. Wait a minute then push the jam with your finger. If it wrinkles, the jam is at setting point. If it doesn't, boil a bit longer and do the 'wrinkle' test again.​

Actually, there is one more thing to think about and this is aimed at the male cooks among you. Be careful after handling all the chillies and wash your hands well with cold water afterwards. If you don't, believe me (I speak from experience!) the consequences will make you really grumpy and very very tearful.

Sterilize your jars either in a low (140°C) oven for 20 minutes or in a hot dishwasher cycle.

Put the chillies (careful guys!) into a food processor and pulse for a minute before adding the red peppers, and pulse again until you have fine flecks of chillies and red peppers.

Dissolve the sugar in the cider vinegar over a medium heat, stirring occasionaly, carefully skimming off any scum that appears on the surface. Then add the chilli pepper mixture, bring to the boil and keep at a rolling boil (be vigilant for boilovers!) for 10 minutes until the jam temperature has reached 105°C (220°F) or the jam has passed the 'wrinkle' test (see above).

Take the pan off the heat and remove any scum that has formed. The jam will thicken as it cools (stir a couple of times to distribute the chilli flecks) and after about 40 minutes ladle into your sterilized jars. Cover with a wax disc and seal tightly.

This jam will keep for at least a couple of months in a cool place but I have kept some jars much longer and they have been even better than when I made them.

​Try it with cheese, bacon sandwiches, grilled salmon, quiche or anything really - it's that good.